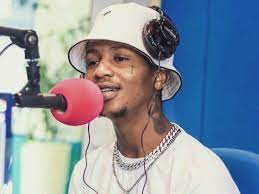 Mthembeni Ndevu, better known by his stage name Emtee, is a South African rapper. He is best known for his debut hit single, “Roll Up”. Emtee was signed to Ambitiouz Entertainment, a South African independent record label. His debut album Avery was certified platinum by RISA on 1 July 2016.

Avery included his breakthrough hit “Roll Up” and the follow-up hit single “Pearl Thusi”. Emtee released his third album Manando in September 2015, the title referring to his late brother. His third album DIY 2 was released in 2018 and marked his final release with Ambitiouz Entertainment, following his departure from the label in August 2019. He then launched his own label in September the same year.

The news of his death was initially rumoured online to be a result of an overdose at the studio, and in the company of Emtee.

However, to quell the wrong information, Emtee records released an official statement stating that the late manager who was also Emtee’s childhood friend, was neither found dead at the studio or in the presence of Emtee.

It is such an unfortunate incident to happen, just at the time Emtee is receiving the praise and accolades for a job well done on the “Logan Album“, as his first in a long while.