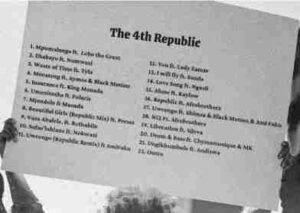 the popular and prestigious music icon whose song have been trending all over the cities of South Africa and the world beyond have dropped a hit album tracklist which is entitled The 4th Republic.
the world music guru who will be going on a music tour soon and fans all over the world can not wait to see thier favourite artist in their cities!!

Prince Kaybee has let the cat out of the bag, which means the project is set to hit the airwaves sooner than we expect it.

While unveiling the content of the project, he mentioned; “Music is a revolution, a better view of life in its most melodic nature.”

He has been steady with the arrangement of this album, and sometime last year, he confessed to having being weighed down by the magnitude of what is about to hit the streets, based on his direction on the campaign.

Kaybee might be controversial on some topics, but he never misses a chance to make a change in the society with his music, the same drive that created the “Project Hope” that featured several female rising stars of the industry.

The upcoming project would be launched by a perfect collabo with Lebo the Great, wrapped up with an outro by the master himself, and also splashed with the right arrangement of tracks to guarantee a smooth transition.