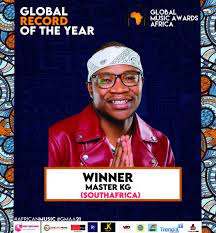 The legendary hitmaker, Master KG has bagged the Global Record Of The Year Award at the Global Music Awards Africa, the first of its kind.

The hit maker also recently announced that Jerusalema went x3 platinum in Italy and that he won the prestigious African Artiste Recognition from The Headies Awards in Nigeria. KG also bagged a handful of nominations including one from the Nickelodeon Kids’ Choice Awards for Fav Global Music Star and Artist of the Year from the MTV Africa Music Awards. The list goes on!

Master KG grew up in Calais Village in Limpopo. He started playing with beats at the age of thirteen using a computer that his late uncle bought him. Master KG was in a relationship with Makhadzi before they split in August, 2020.

The award was given on the basis of the viral track “Jersulama” featuring Nomcebo, which also earned a couple of other wards last year.

This is an endorsement of the fact that the track is a classic jam, and fits all the criteria to make it an international trend, regardless of the season.

Master KG’s shelf is also heavy with Musician of the Year from GQ South Africa’s Men of the Year Awards and Best International Song for the NRJ Music Awards (Paris Edition) from 2020 yet, he is presently reeling in over 5.6 million monthly listeners on Spotify. Impressive is an understatement; the smash hit is definitely for the history books!

This debut edition of the GMAA was held virtually and also broadcasted live, with performances from the likes of Levites Band, S3fa, Epixode, Sherifa Gunu, and Star Zee.

Master KG Bags An Award From The Global Music Awards Africa! Our very own musician and record producer has won an award from the prestigious event. The GMAA official website states that this event seeks to showcase African talent and, “… promises to place an incredible standard in this year’s maiden edition 2021.” We are delighted to hear that Master KG has taken the biggest one yet!

KG has definitely been caught up in a whirlwind of awards this past couple of months. His most recent is a reminder that he still has the entire world wrapped around his finger because of Jerusalema, which is currently sitting at over 382 million views on YouTube and 186 million streams on Spotify! So it is only fitting that he is the winner for The Global Record of the Year.

Master KG’s music career started when he got in touch with DJ Maebela and they began experimenting with music software specifically FL Studio. In 2016, after much practice, he released his first single “Situation.” After getting signed to his current record label, Open Mic Productions, Master KG released his debut album Skeleton Move in 2018. Master KG has collaborated with a number of artists including Zanda Zakuza and Makhadzi.

He sings in his local language Khelobedu, a language spoken by Lobedu People. Master KG has performed in a number of other countries including Zambia. In December 2018, his song “Skeleton Move” was apparently voted Thobela FM’s song of the year and sparked controversy as King Monada’s fans felt “Malwedhe” (which is King Monada’s song) deserved the award.

In December 2019, Master KG released the song “Jerusalema”, featuring Nomcebo Zikode. In mid-2020, it went viral online, charting internationally and spawning a remix with Burna Boy. The video of “Jerusalema” was taken down on YouTube on the late hours of 5 August 2020, but was restored on the following day.

the popular and prestigious music icon whose song have been trending all over the cities of South Africa and the world beyond have dropped yet another news.
the world music guru who will be going on a music tour soon and fans all over the world can not wait to see thier favourite artist in their cities!!