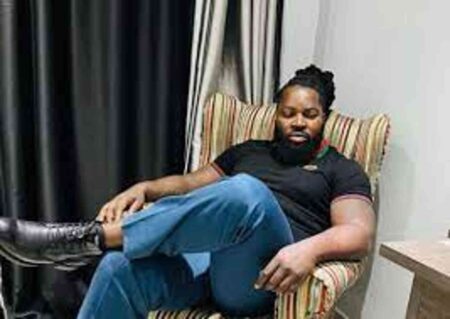 The amazing and popular SA music icon Big Zulu whose song have been trending and making headlines on the music industry is at it again and this time with an amazing dig at some popular SA rappers and that is why the song 150 Bars is making the headlines.

On Friday night, the rapper shared a snippet of his 150 Bars (Ke Hip Hop Dawg) which features Nasty C and Patoranking. In the snippet shared, Big Zulu fired shots at the music career of SA rappers.

He claimed he’s not beefing any rapper but he dropped the diss track to prove that SA Hip Hop is not dead.

Dissing Cassper, Big Zulu said, “Angiqale ngawe ngob ngathu uyaspida, usasemnance Mufasa kimi awuhlukile no Simba (Let me start with you because you are too forward, you are too young and to me, you are like Simba.”

He bragged about his booking fee which is R100 000 and mocked other rappers for charging R25 000.

He dissed Emtee about his  Mercedes-Benz tattoo on his neck “Ungangitsheli ngo Stogie T, I Mercedez Ise ntanyeni kodwa ama garage a Emtee” (Don’t tell about Stogie T, the Mercedez is on his neck but the garages are Emtee.”

“AKA and K.O the last time I heard you guys were running Jozi where are y’all running because the Comrade marathon is over,” he says in the lyrics.

Social media users have been buzzing due to the diss track as no one saw it coming.

SA rappers when they are asked if they going to respond to 150 bars by Big Zulu#bigzulu#150bars pic.twitter.com/LHuS9J8tkK

Dammmmn Big Zulu says he asked Duncan for a feature and Duncan said no . Coz big Zulu’s career “iyabanda “…….. now tables have turned …… 💔

Big Zulu went for Nasty C and Emtee norrr man🤦🏾‍♂️ they are about to end is career especially Nasty pic.twitter.com/sTuIsNv7sn